Another year, another Bonnaroo: the Manchester music festival’s 11th run but the first for this girl. Why had I never been before? Timing mostly and a fear of the cliches: too hot, no shade, way too many people and not enough showers. Thanks to those fears and about a million suggestions from Bonnaroo veterans, my girls and I were basically prepared for the apocalypse. However, when we arrived on Thursday after the quick drive from Nashville, complete with an OJ Simpson-esque car chase, we were pleasantly surprised. No long lines or scorching heat! Just music. And lots of crazy outfits. Perfection. With 80,000 people in one place for four days you hear a lot – here are my favorites from the weekend.

“If you from the South, make some ——- noise!”
– Ludacris’ highly effective opening line.
Alright so I was just as perplexed as the next girl when I heard Luda Luda would be playing a set, and in a tent no doubt. Sure, Bonnaroo might not have been his target audience but people showed up, singing and dancing to all of his hits while he ran around like a crazy homeless man. Entertaining? Absolutely. Were the chicken and beer balloons and stripper pole necessary? Probably not. But it was Ludacris.

“I just want to go into this tent and scare some people.” – Kenna

(They then walked past the tent and noticed a couple potentially conceiving a Bonnaroovian baby, if you will. Awkward.)

Alright so after hearing a little Radiohead we headed to a baby tent to hear a funky band with the best props and crowd-surfing tuba-ist. Before their set this tiny girl was intensely hula hooping in the middle of said tent. As she got more crazy with it more people sat down and watched, including one gentleman who sat by us and struck up a conversation.
Guy: “Hey, what’s your best trick on that thing?”
Hula: “I don’t really know.” (continues to hula, drops the hoop, then starts again)
Guy: “You know I don’t want you to think I’m a creep because I keep staring at you hula hooping.”
Hula: “It’s because it’s just so —- —— sparkly.”

“I want to see everyone take off everything they have and put it in the air!” – Major Lazer
I am only one person but I did not see anyone take him up on his nudity offer.

“I feel a lot of love in the field.” – Seth Avett, after errybody sang along to Murder in the City.

“He’s just so cute I want to put him in my pocket!” – Kenna, referring to Trampled by Turtles front man, Dave Simmonett. 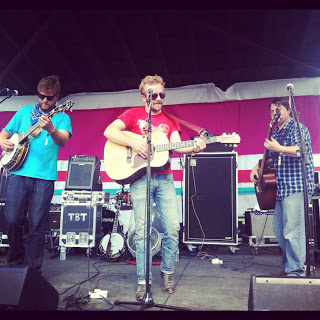 We all know my love for these boys, and let me tell you, they did not disappoint. We worked our way to front and center, ending up by a girl named Katie from Minnesota who had never heard their music, and after they completed their own sound check they play an incredible set full of favorites and a nice cover of “The Weight.” They need a bigger tent next year, Bonnaroo.

“Hey, do you have time to cook my ‘shrooms?” – Random dope to the “cooks” at a food truck.

“She pulled up in her Cadillac.” – Me, noticing some of the older crowd pouring into the field for The Beach Boys.

“He has a few missed calls and two messages.” – Chelsea, referring to the young man passed out in the sand in the middle of the Other Tent with his phone on his chest, totally oblivious to the massive crowd awaiting the show to start. 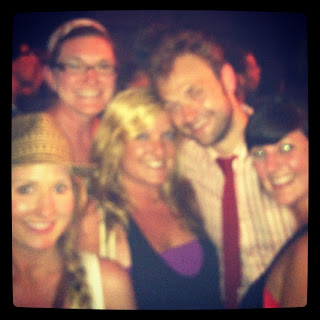 Curiousity and a member of The Roots led us to this show, not knowing who would be the highly anticipated special guest. We weaved our way to a nice spot close-ish to the stage and incidentally next to the Punch Brothers and a bottle of wine. Chris started talking to us, asking about tennis and telling us that D’Angelo was in fact the special guest. (!!!) Lots more conversation and shenanigans and then it was time for this girl to peace out. I went to say bye to Chris and instead of a high five he basically picked me up with a bear hug and asked, “Where are you staying tonight? Why don’t you come with me?” I laughed and left with my girls.

“I am getting Verizon the second we get back to civilization.”
– Me, referring to AT&T’s ridiculously bad service

“Does anybody know where that compound with the baby doll head is at?” – Kenna trying to find the “landmark” to lead us to our car and home to our cozy cabin.

Despite and in spite of it all I’m a fan. Bonnaroo won me over and I can’t wait to see what next year brings! Maybe cotton candy and the return of Grace Potter? Until then.