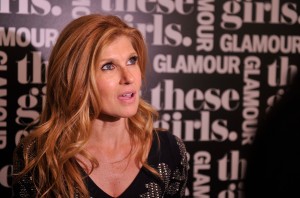 Can we all take a moment to reflect on the fact that Connie Britton was supposed to make a guest appearance on GIRLS? THE Tami Taylor, Rayna James! The woman who I had to restrain myself from awkwardly hugging her perfect ginger hair when I sat next to her in my favorite Nashville brunch spot a few weeks ago.

Apparently her crazy Nashville schedule kept her from being able to make it happen during Season 3, and while she’s bummed about it the rest of us are like WHAT? So many questions to consider here.

What character would Connie have been?

Was she cast as Adam’s “age-innapropriate, way out of his league” love interest? (Apparently they make it out in their upcoming, This Is Where I Leave You – gross? Yes.)

What does Connie think of Lena?

What does Connie’s hair think of Lena’s “British man” do?

Would Coach Taylor approve of her cameo on the same show where the leading lady is naked more than she’s not?

What is Tim Riggins doing now?