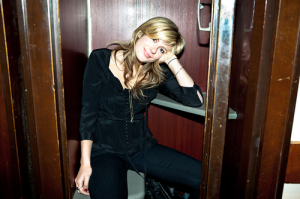 To hear her is to love her and let me express that I love this woman, I really do. She headlined her first show in two years Friday night here in Nashville (with THE Watson Twins!) and I think it’s safe to say the sold out crowd collectively swooned. Her sound is fresh, very California meets Nashville, the perfect storm of Southern charm with a breezy sound. It should also be noted that her hair is perfection and her style effortless.

Personally, I thank Baylin for her third album that first came to my rescue during the break-up that was my emotional equivalent of the crash of 29. “Little Spark,” full of potent lyrics sang in a seductively distant echo, was just what the doctor ordered to mend my broken heart and serve as a reminder of many things. Watching her up close and personal almost two years later, memories flooded back as she crooned “the way he shifts his eyes, and won’t connect with your’s; that’s when you realize, he’ll never give you more.” It was perfect and couldn’t have come at a better time.

Buy her albums, all of em’, and thank me later. Do I ever steer you in the wrong direction?